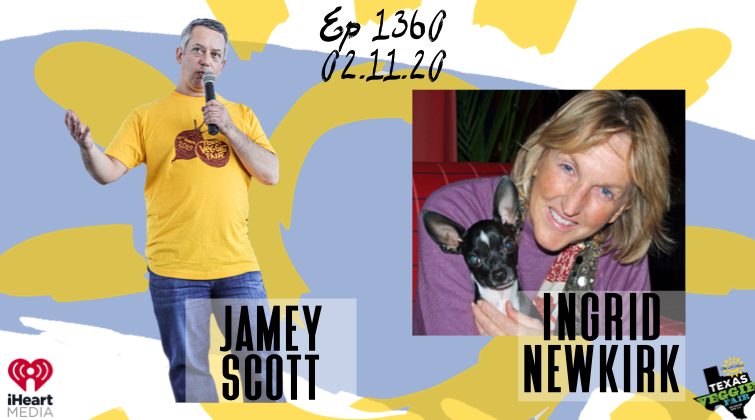 Ingrid Newkirk is the president of People for the Ethical Treatment of Animals (PETA) the largest animal rights organization in the world, with more than 6.5 million members and supporters worldwide. She is the author of more than a dozen books that have been translated into several languages, including her latest, Animalkind: Remarkable Discoveries About Animals and Revolutionary New Ways to Show Them Compassion. PETA focuses its attention on the four areas in which the largest numbers of animals suffer the most intensely for the longest periods of time: in laboratories, on factory farms, in the clothing trade, and in the entertainment industry.

Before we dive into everything Vegan, we have Ingrid Newkirk and Bernadette discussing animals being locked outside during the cold winter months. Click here to purchase a dog house for an at risk dog. Dogs left outdoors are often chained or penned without adequate shelter and suffer terribly. Our goal is to educate guardians about good animal care, especially the basic notion of allowing dogs to live indoors as members of the family. Unfortunately, changing attitudes takes time. When people insist on keeping their dogs outside and refuse to relinquish them, PETA works to improve the dogs’ lives.

Going Vegan Is Easier Than You Think

Ingrid says it is the perfect time to go Vegan. Vegan foods lower your blood pressure, which is something that we all need right now in this political climate! Why go vegan? The better question is why wouldn’t you? There may have been a time of survivalism where we needed animal proteins, but we don’t need it now. With the influx of vegan cheeses, milks, egg substitutes, and meats, there is no excuse anymore! Vegan food is everywhere. Ingrid says when she goes out to share meals with her friends, she sees that their side dish is a pill bottle because of subsequent health problems. Go vegan for yourself, your kids, and your family. The average vegan lives 7 years longer than the carnivore, so you decide what’s better!

Ingrid talks about lamb’s wool and how cruel it is. In Australia, the most commonly raised sheep are merinos, specifically bred to have wrinkly skin, which means more wool per animal. This unnatural overload of wool causes animals to die of heat exhaustion during hot months. Attracted to the moisture, flies lay eggs in the folds of skin, and the hatched maggots can eat the sheep alive. To prevent this so-called “flystrike,” Australian ranchers perform a barbaric operation—mulesing—or carving huge strips of flesh off the backs of lambs’ legs and around their tails. Please cast wool aside!

Jamey Scott is the founder of DallasVegan.com, Dallas Vegan Drinks, and the Texas Veggie Fair, all of which are major contributors to the thriving vegan community in Dallas, TX. He has received multiple awards for community leadership, including The Pollination Project’s Unsung Hero Award for his work in “veganizing” Dallas.

Texas Veggie Fair On The Air

The Texas Veggie Fair began in 2010! It all started with an idea Jamey Scott had during the “fair and festival” times in Texas. He thought that Dallas restaurants were doing better with offering vegan dishes, but festivals and fairs rarely have vegan options. Jamey was not always vegan! He wanted to find a new lifestyle, but couldn’t find resources to help him eat vegan, so he started his website DallasVegan! To Jamey, being Vegan means doing as little harm as possible. From the environment to your own body, veganism has the least impact to the earth. You can start to learn about veganism by just participating in meatless Mondays! Even teetless Tuesdays! It is easier than you think!

Stick around the while week here on One Life Radio for the whole Texas Veggie Fair On The Air! We will be giving away even more vegan items and bringing you more vegan news!

A big thank you to our guests, Ingrid Newkirk and Jamey Scott!