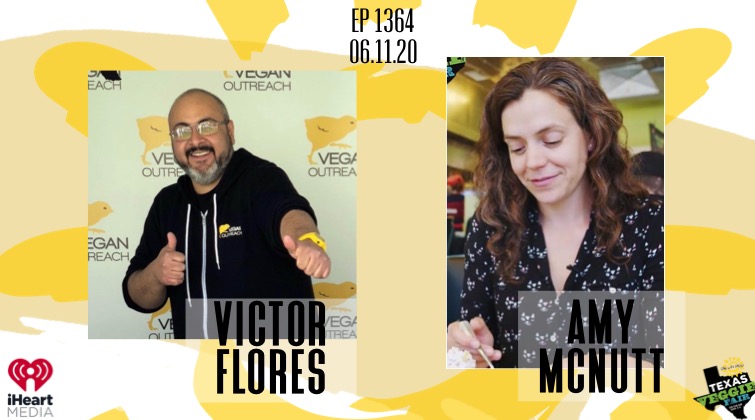 Texas Veggie Fair has come to an end, but boy did we have fun! Even Junior learned a lot about veganism and vegan food, literature, legislation, and film! We have a great show in store for you today with Spiral Diner owner Amy McNutt at the half! First up, we have Victor Flores from Vegan Outreach, so let’s get started!

Victor is the online and community outreach specialist for Vegan Outreach, a global non-profit organization working to end violence against animals. As the community outreach specialist, he has hosted many vegan themed events in New Mexico, has helped launch 10 Weeks to Vegan en Español and manages the Vegan Food Aid Program in Albuquerque, helping undocumented families and the Navajo Nation. Victor, his partner Karla and their children are a vegan family of six. They love working together promoting vegan events and most recently opened Root 66, a vegan food truck based in Albuquerque, New Mexico. Victor also co-founded CampV, an all vegan summer camp for kids; La Raza Vegana, a Facebook page dedicated to vegan topics in Spanish and the Plant Powered Pop-up Market.

Vegan Outreach’s main goal is to end violence to animals and to stop using animals for our advancement. Reaching out to people, exposing animal cruelty, and educating people is the big thing that Vegan Outreach does! Because of his partner, Karla, Victor went vegan! Karla began volunteering with Vegan Outreach, and that led to a beautiful relationship between Victor and Karla, as well as new people and veganism. Victor said if he would have been exposed to vegan education sooner, that he would have become vegan a lot sooner. Finding foods that he already ate made it east for Victor. Food is an activism tool, so take your friends and family members to vegan restaurants! Show them how great everything tastes.

Want to try vegan? Don’t know where to start? 10 weeks to vegan is a program provided by Vegan Outreach that aids vegan-curious people through a program that educates others as to how easy and delicious it is to become vegan! Sign up for the program here!

Amy McNutt is the founder of Spiral Diner and Bakery, opened in 2002 out of her love for animals and the environment. As one of the most unusual success stories in the restaurant world, Spiral Diner continues to thrive today with three locations and a production kitchen. Her goal is to show how we can enjoy the great flavors of comfort food without using animals. Married to James Johnston since 2003, they happily live in Fort Worth with their three rescue bunnies and two cats.

Amy says that her extreme optimism was part of the reason she decided to open up an all Vegan diner! To her luck, there were people who craved homestyle food but made vegan. At a young age, Amy decided she really loved animals and didn’t want to do anything to hurt them. At age 12-13, she became vegetarian with her family’s support. Amy said she thought she needed to eat a lot of milk and eggs to maintain enough protein in her vegetarian diet. Walking down Venice beach, she was handed a PETA flyer about dairy production, and then and there her mind was made up. She went on to research on her own and made the decision to go 100% vegan that ultimately changed her life!

Check out any of the three Spiral Diner locations in the Dallas Ft Worth area to grab a meal that you won’t regret! Our personal favorite is the Patty Melt that rivals the Texas chain’s meat filled one…

A big thank you to our guests, Victor Flores and Amy McNutt! Read more about Vegan Outreach and Victor Flores, here! Check out the menu and plan your visit to Spiral Diner in Dallas, here!