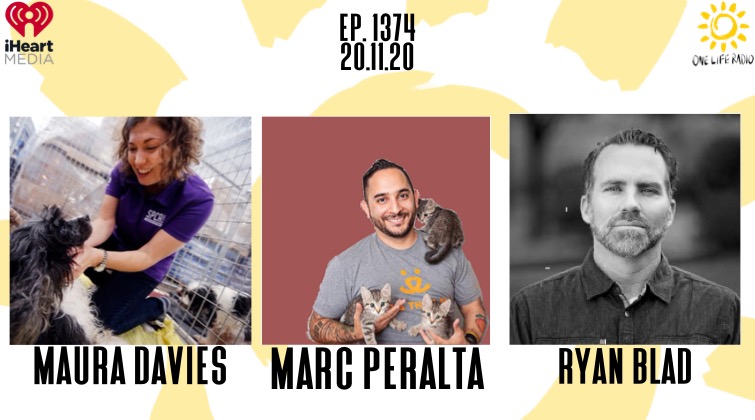 It’s a furbulous day here in Dallas, Texas! We are proud to say we have partnered with Castor & Pollux Pet Food! As the leader and maker of America’s #1 organic pet food, Castor & Pollux has set a new standard with the most comprehensive portfolio of purposeful pet food. Read more about feeding your animal Castor & Pollux pet food, here! We are so excited to have Ryan Blad on at the half on behalf of our long-time sponsor, Sunwarrior. First up, we have animal aficionados Marc Peralta and Maura Davies!

Maura Davies is the Vice President for Marketing & Communications at the SPCA (Society for the Prevention of Cruelty to Animals) of Texas.

Dogs and Cats are different when it comes to human years being considered animal seniors. 7 years is the general range for cats to be considered seniors. For dogs, the age in human years varies from breed to breed. Consider adopting a senior dog! It is beautiful to be there to guide a dog over the rainbow bridge. There is a dog named Bumble at the SPCA Dallas Shelter that needs a home! Bumble came to the SPCA of Texas through a cruelty case, so as you can expect he am a little timid. He is hoping to find a home where all 153 lbs of him can be loved and treasured, so please look into him here!

Marc Peralta is the Senior Director of National Mission Advancement for Best Friends Animal Society. Best Friends is a leading national animal welfare organization dedicated to ending the killing of dogs and cats in America’s shelters. In addition to running lifesaving programs in partnership with nearly 3,000 animal welfare groups, Best Friends has regional centers across the country and operate the nation’s largest no-kill sanctuary for companion animals. Prior to joining Best Friends, Marc served as Vice President and Chief Operating Officer, as well as interim CEO for the Pennsylvania Society for the Prevention of Cruelty to Animals.

November is adopt a senior pet month and we’re celebrating all month long, because senior pets are some of the best. They may be a little gray around the muzzle and they might not have as much energy as they did when they were little (although some of them could probably still outplay a hyper puppy, kitten or colt). But there’s no shortage of love to give. Senior animals don’t always have a bad prognosis, they’re just old! Give older pets a chance and they’ll fill your home with love. Marc started his own senior pet rescue called Vintage Pet Rescue. Check it out here. They have the cutest pet pics!

Ryan is the Chief Marketing Officer for Sunwarrior, a long-time sponsor of One Life Radio.

Sunwarrior has partnered with Best Friends Animal Society! And wouldn’t you know it, Sunwarrior is the only supplement company that is 100% vegan. Sunwarrior only aligns themselves with companies and organizations that they are 100% behind. Ryan himself once volunteered at the Utah Best Friends animal sanctuary!

How Sunwarrior started is an interesting and riveting story. At the age of thirteen, Nick Stern began his health journey. He had a small frame and wanted to build muscle and began lifting weights. At the time, his sister-in-law worked at a health food store and provided Nick with some guidance and introduced him to nutrient-rich wheatgrass juice. Denley grew up working in his parents’ fruit stand. They had plenty of fresh produce to choose from, but as Denley explains it, his daily diet consisted of Twinkies, Coke, and a puff of smoke. By the time he reached his teens, Denley was not a well boy. He developed asthma and other lung issues and was constantly sick.

Nick and Denley, the co-founders’ paths connected them in 2007 and they met at the Raw Food Festival in Sedona, Arizona. Their ideas became a plan, and after multiple tests and persistence, Sunwarrior created its first raw, plant-based protein powder, with a mission to Nourish & Transform The Planet.

A big thank you to our guests, Maura Davies, Ryan Blad, and Marc Peralta! To read into all of Sunwarrior’s amazing products, click here!