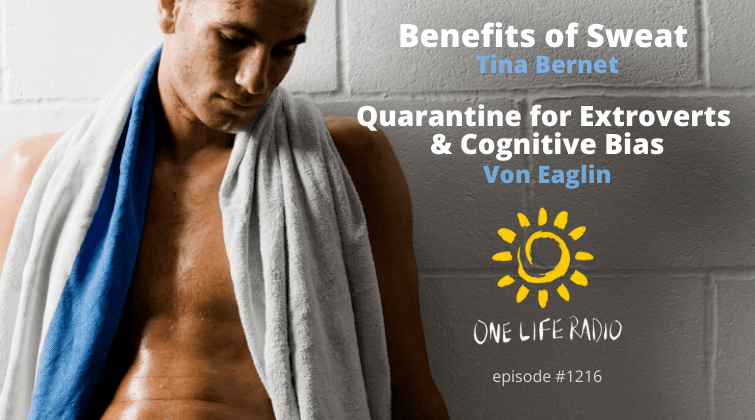 Sweating is good for you! One of our favorite fitness trainers at One Life Radio, Tina Bernet, is back to talk about the benefits of sweat for removing toxins from the body. There are so many ways your body takes in toxins; food, air, household products, cleaners and more. BPAs and PCBs are two of the most dangerous industrial chemicals still found in items we use daily. The water bottles most of us use every day can have certain amounts of BPA. It’s released into our systems, especially when the bottles have been in the sun or heated during delivery.  Bernet says we can manage the amount of these toxins by drinking from glass bottles whenever possible.

Bernet also reminds us that sweat is a bacterial cleanser. If you get stinky from time to time, you probably have more bacteria in your system than normal. Drinking lots of water will help to eliminate the extra bacteria. Don’t be afraid to sweat it out!

Next, Von Eaglin is back to talk about the differences for quarantine for an extrovert versus an introvert. Basically, everyone has a genetic predisposition to be wired a certain way. Their environment growing up also plays a part in their overall personal make-up. Extroverts love engaging with other people. That doesn’t mean that they can’t be alone as well, but quarantine will be more difficult without the stimuli of interaction with others. Von’s tips for extroverts? Make a plan for ways to connect with people. Write letters, set up a zoom meeting, make TikTok videos for your friends or call family you haven’t talked to in a while.

Cognitive Bias – What is it, and do you have it? – Von Eaglin

Von stays with One Life Radio to discuss cognitive bias. This is a type of thinking when people interpret information and simplify it based on their beliefs and environment. It’s a way for people to protect themselves, but it can turn into discriminatory thinking. For instance, when you think you’re a great driver, but you also believe that certain ethnicities or genders are bad drivers, it’s cognitive bias. Studies have shown that most people believe that they are better at certain things than most people, when statistically they aren’t. People with cognitive bias think they don’t need self-improvement or more education on a subject, when in reality, they don’t know the subject they are talking about at all. For example, someone who watches basketball on TV may think they are good at playing basketball when they haven’t played at all.

Listen to the entire podcast for more on the benefits of sweating, quarantine ideas for extroverts and cognitive bias. All of us at One Life Radio thank everyone for tuning in.