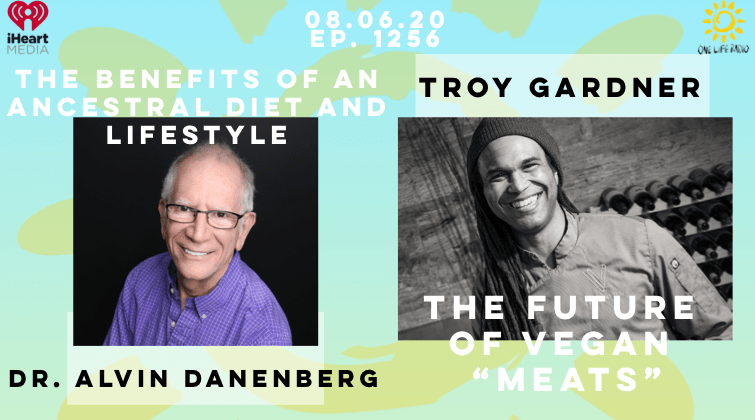 We are bringing our One Life Radio listeners two sides of the coin on today’s show. We have Troy Gardner, head chef and owner of TLC Vegan Kitchen, talking about vegan “meats”. And, Dr. Al Danenberg joins us with a health update and his ancestral nutrition protocol which he says helped him to beat terminal cancer.

Troy Gardner joins us from V-Eats restaurant and his newly created TLC Vegan Kitchen, a vegan delivery dining experience using a “ghost-kitchen”.  Gardner and his team spent years perfecting vegan “beef” dishes that taste like the real thing.  His vegan dog took over a year to create. Bernadette offers her tip for perfect vegan dog grilling, She recommends soaking vegan dogs in avocado oil before grilling.  They turn out perfectly.

Gardner says texture is the most important factor when cooking vegan “meats”. Portabello is an amazing meat substitute. But, the type of oil you use is just as important for a true meat taste. Olive or avocado oils work well. And, the pièce de résistance is an acid like citrus or vinegar. The marinade mixture is imperative for your vegan meat dish to taste like meat and not just a mushroom. Check out Troy’s new concept at tlcvegankitchen.com

We love hearing from Dr. Al Danenberg.  He recently received news that he is cancer free after battling incurable aggressive multiple myeloma for two years. He says his ancestral nutrition protocol was a contributor to his ability to beat cancer.

Dr. Danenberg says he had to avoid inflammatory foods because they support the growth of cancer cells. For anyone dealing with illness like cancer, it’s important to remove these foods as well as chemicals from your diet. Inflammatory foods include grains, sugar products, safflower and other processed oils and legumes.

His ancestral nutrition protocol consists of mostly animal products right now. Fats and organs are the most important components of his diet. Currently, he eats two-to-one fat to protein. Bernadette asked about the quality of the meats he’s consuming. He says every animal is pasture-raised and grass-fed. After starting his ancestral lifestyle and diet, he lost 30 pounds and eliminated all of his medications from a stroke he had years previously.

Bernadette and Dr. Danenberg both swear by our sponsor, Enviromedica’s Terraflora synbiotic as well as their bone and organ supplements. Check them out at enviromedica.com. You can also visit drdanenberg.com to learn more about Dr. Al’s journey and follow his blog.

Everyone thank you for listening and have a great week!